Well today Coco had his first haircut!  We decided we liked the fuzzy look and he really does like getting brushed so we decided to pretty much keep him longer.  Kandy trimmed off some of the crazy hair on the top of his head and cleaned up all the hair around his little eyes.  Speaking of eyes…his eye is looking so much better!  He must be feeling better too!

He and Bandit are chasing each other around now so there is some interaction between the two of them.  Coco is doing MUCH better with his crate training so everything in our house is settling down some.

I promise I won’t be doing a lot of doggie pictures but I’ve had a lot of people ask me how things are going and I wanted to share! 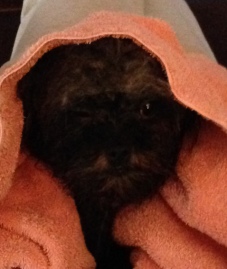 It’s a wooky!  Thought I’d do a quick update on the little doggie and how things are going.  First his name is Coco because he is mostly brown.

The rescue place thought that he was Papillon and Poodle but we decided he is mostly Shih Tzu and the Poodle in him is putting the kinky in his hair.  He and his brother both got baths today and I was trying to warm him up.

We went to the vet today…he is a whooping 7.4 lbs.  (Of course, if you would cut off the hair he would probably be 5 lbs tops!)  He is 7 months old.  If you notice in the picture his right eye is closed.  We have noticed since we brought him home of Saturday when you have him on your lap and are petting him he always closes his right eye.  We were concerned something might be wrong with it.  His little eye has had some damage to it (it is healed though) and it is all red and a little swollen.  He has a damaged spot on his cornea.  We are going to start with drops and hopefully that will take care of it.  She thinks it is causing him some pain so we do need to fix it for the little wooky! 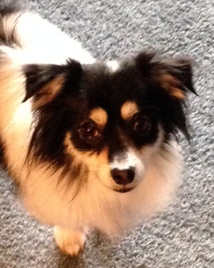 And of course, we need a Bandit update too.  He really has perked up!  He use to be entertained for hours over all the ‘crazy’ stuff Gypsy did…you know the really ‘crazy’ stuff…breathing, sleeping,  He really just stayed in his crate last week and didn’t eat much.  I would try to get him to play a little and he wouldn’t.  Well now there is something new and irritating in the house and he is back to his old self.  We are starting to get a little interaction between them and it is just sooo good to see!  I was worried about the little fellow!

So that’s the update on the puppies.  We are just really hoping everything is okay with the little guy’s eye!

Well…we didn’t last very long as a one doggie house.  Poor Bandit has been so beside himself that we decided we needed to get a friend for him pretty quickly.  I will be honest…bringing home our new ball of fuzz went MUCH better than I anticipated.  It’s not love at first site but it wasn’t a snarling mess either!  So far…so good. 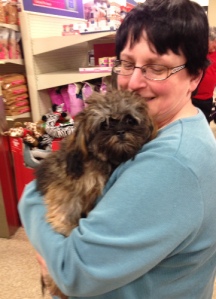 We went to the same rescue group (Luv4K9s) that we got Bandit from.  I had contacted them ahead of time and they had a bunch of little puppies there for us to look at.  So we sort of fell in love with this little guy.  They said he is Papillon and Poodle…I’m thinking mostly poodle.  He’s starting to settle in some.  Had his first bath and did well.  For being so new he is already playing some with toys.  Bandit is not 100% sure yet.  I VERY funny story though….we have had Bandit for 3 years (next week…on Halloween).  For ALL the baths he has had in those 3 years he has never (and I do mean NEVER) voluntarily walked down the basements stairs.  Did I mention NEVER???  So I take new puppy down for a bath and here Bandit is outside the bathroom door downstairs whining.  So very odd…he has NEVER gone down there on his own!

Oh…have had some folks ask…what’s his name?  He came to us as ‘Snooter’ from Luv4K9s and right now we are calling him Coco as he is sort of a brown color.

So…wish Bandit luck as he gets to know his new brother and for those of you coming over you’ll get to see the new ‘kid’.