Well…we didn’t last very long as a one doggie house.  Poor Bandit has been so beside himself that we decided we needed to get a friend for him pretty quickly.  I will be honest…bringing home our new ball of fuzz went MUCH better than I anticipated.  It’s not love at first site but it wasn’t a snarling mess either!  So far…so good.

We went to the same rescue group (Luv4K9s) that we got Bandit from.  I had contacted them ahead of time and they had a bunch of little puppies there for us to look at.  So we sort of fell in love with this little guy.  They said he is Papillon and Poodle…I’m thinking mostly poodle.  He’s starting to settle in some.  Had his first bath and did well.  For being so new he is already playing some with toys.  Bandit is not 100% sure yet.  I VERY funny story though….we have had Bandit for 3 years (next week…on Halloween).  For ALL the baths he has had in those 3 years he has never (and I do mean NEVER) voluntarily walked down the basements stairs.  Did I mention NEVER???  So I take new puppy down for a bath and here Bandit is outside the bathroom door downstairs whining.  So very odd…he has NEVER gone down there on his own!

Oh…have had some folks ask…what’s his name?  He came to us as ‘Snooter’ from Luv4K9s and right now we are calling him Coco as he is sort of a brown color.

So…wish Bandit luck as he gets to know his new brother and for those of you coming over you’ll get to see the new ‘kid’. 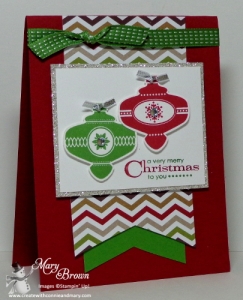 Happy Saturday everyone!  Today is a very special day because it is the end of week 1 on Create with Connie and Mary Winter Collection 2013 where we were all about cards!  On Saturday we have a challenge and everyone is welcome to join us!

This week (our first week) we have a fun sketch challenge for you!

So…here the details for my card…

We just finished up Week 1 of Create with Connie and Mary Winter collection 2013.  This week is one of mine (and probably of the designers too) favorite weeks where it is all about cards…24 cards that are only seen by our subscribers.  We do not show our projects (except Preview Week and Saturday Challenges) anywhere on the Internet.  Although Early Bird pricing is over…IT IS NOT TOO LATE TO SUBSCRIBE!  It’s all about Christmas and Winter projects!  It’s not too early to start planning those gifts and decorating and we have lots of GREAT ideas to help you!  See more information over on Create with Connie and Mary!

Until next time…HAPPY STAMPIN’!

Posted in Create with Connie and Mary, Holiday Mini